Story made possible by the contributions of an anonymous source through the comments section who gave us permission to use the information, but not to publish the comment.

The command at the Arizona State University Police Department take nothing more seriously than acquiring more additional money for themselves and what the troops have come to call their minions, the cadre of supplicants, “the clique”.  The quickest way to get more money at the Arizona State University Police Department is to ingratiate yourself with those in charge. It doesn’t require experience or competency in the job you’re sworn to do, everywhere else it usually does, but not in the ASUPD. There are Sergeants running around clueless with only one year of university only patrol experience managing officers with 2, 5, 10, 20, and 30 years of patrol experience. Some of these officers even tested against these Sergeants, beat them until it came to the “oral boards” where all other testing scores and resume experience no longer mattered and they lost out on the position. Some of these applicants were highly decorated officers from city departments who put their lives on the line for many years before coming to a whore house masquerading as a state police department.

We are not critics of state support for law enforcement. We are critics of those who undermine the efforts and image of the noble uniformed police officer for their own enrichment at the cost of safety for the communities they are sworn to serve. The Arizona State University Police Department has a sizable budget in the double digits for millions of dollars. It’s further acerbated by the fact the police department’s command seems unable to stop officers (the ones who really work as actual cops) from wanting to leave the department, but receive funding to hire as many officers as possible and convert the line money they receive for the officers they don’t have to what they term as “salary savings”.

We received some information in the comments section from a anonymous source who did not wish to be published, but said we could use the information provided. We learned that ASU Police Commander Louis Scichilone managed ASU Police overtime for the DUI Taskforce for many years that other police departments co-participate in. While managing the overtime Commander Louis Scichilone would hand pick who worked that overtime detail. In doing so he selected his friends like ASU Police Sergeant Mark Aston, ASU Police Sergeant Pamela Osborne, ASU Sergeant/Commander Christopher Speranza, and others to receive the additional money for these events.

After selecting trusted friends for the DUI Taskforce events, ASU Police Commander Louis Scichilone and these other three officers would ride 4 to a patrol vehicle, make some token stops for stats, but lacked in custody DUI arrests before collecting time and a half overtime pay at the Sergeant rank. Sometimes other officers were included in this scheme, but no other names were given to us. What we don’t know is how many times this scheme was carried out or the dollar amount essentially stolen from government grants and payments from families who lost relatives to drunk drivers. M.A.D.D. We were also told that the Arizona State Police Department was uninvited to participate in D.U.I. Enforcement overtime due to a lack of performance. This grant make sense as a way for the state of Arizona to bolster the tarnished image of the Arizona State University Police Department, but it’s more good money after bad results for the tax payer and the public who could be better served if the troops had adequate leadership with a resemblance of integrity, at least average intelligence, and a modicum of people skills.

The partnership of the ASU Police Department patrolling with the Tempe Police Department in the Safe and Sober program, an effort designed to decrease rowdy off-campus behavior, often saw ASUPD Officers being diverted to assist or take primary on regular ASU Police calls, due to the shortages in staffing that have plagued the department for many years. The off-campus Safe and Sober program succeeded in cleaning up Tempe, but drove the crime back on to the Arizona State University Campus where the lack of patrol units is an open invitation for criminals to shop-without-a-cop in the Arizona State University Crime Spree Zone. Here’s the ASU State Press article on the grants: 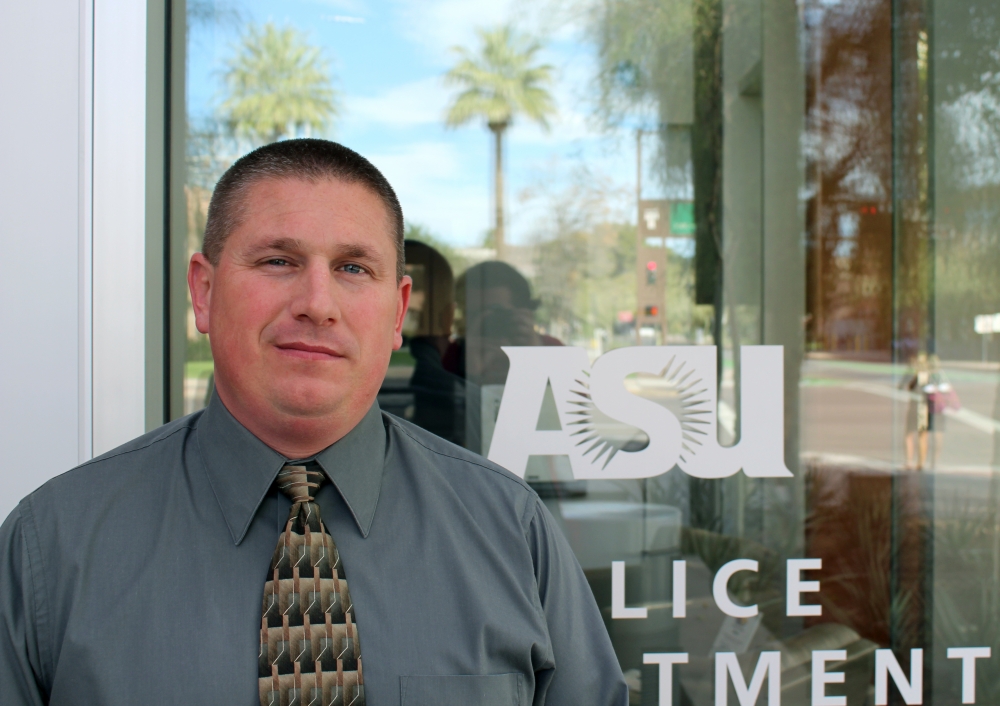 Commander John Thompson, who oversees Tempe campus patrol operations for the ASU PD, poses for a picture outside the ASU Police Department offices in Tempe, Arizona on Feb. 16, 2017
By Mitchell Atencio | 02/16/17 7:49pm

The grant is split into two parts: $60,000 for DUI and youth alcohol enforcement, which primarily covers overtime pay for officers a part of the task force, and $5,000 to be spent on Portable Breath Test Instruments.

The department was also awarded $3,080 for Selective Traffic Enforcement, a program focused on adding police to monitor pedestrians and cyclists in the area, according to a press release issued by ASU police on Feb. 10. (AKA Extra money for doing what a police department is supposed to do.)

Commander John Thompson, who oversees Tempe campus patrol operations for the ASU police, said the GOHS has given out grants to local police departments for as long as he’s been an officer.

“This year – in 2016 – we applied for another grant and we were awarded monies that we will use,” Thompson said. “We began utilizing that money over the Christmas holiday season so during pretty much the entire month of December … every weekend and the week leading up to Christmas and the week after Christmas there are ongoing task force efforts almost on a nightly basis.”

Thompson said the department does not ask for a specific amount of money, but simply applies for a grant and the GOHS determines the amount.

The money allows the department to put more officers on duty during bigger campus events, such as football games.

“This money allows us to bring in officers on overtime and go out and specifically spend their efforts looking for DUIs, people violating DUI laws, and then as well as any other traffic related issues that we might encounter,” Thompson said. “When we have … Devilpalooza in a couple of weekends here we’ll have a couple of officers in.”

Thompson said the grant will help pay for around 11 PBT breathalyzers the department bought recently. (So the money can be spent on lunches for command meetings and special trips for command and their friends in “training”.)

“We already have multiple of those machines that most of our officers do carry, this is just more that we can put in the hands of even more of our officers,” Thompson said.

This year’s grant was approximately $15,000-20,000 more than last year, Thompson said, mainly because the University and department have both grown.

GOHS Director Alberto Gutier said the office is glad to grant this money to several departments and organizations across Arizona.

Gutier said overall the ASU police does a good job utilizing their grants, which is why they are happy to provide them with money yearly. (So how was this “good job” verified? The state says the state is doing a fine job, not surprising.)

“PBTs are about $500 apiece and that includes mouth pieces that PBTs use,” Gutier said. “We probably provided a thousand plus PBTs the last couple years for agencies around the state. You can buy a very good PBT for $350-400, you add to that shipping and mouthpieces – it’s about $500 so if we give $5,000 it means they can order 10 PBTS.”

The Selective Traffic Enforcement is an effort to educate and inform students on campus the laws of being a pedestrian or a bicyclist, Gutier said. He said new students often don’t know the laws, which can lead to traffic accidents, so the education and warning is better than just giving a ticket.

Gutier said the department gladly provides funding for programs protecting pedestrians and bicyclists because of the rate of pedestrian fatalities in Arizona.

Daniel Roman, a civil engineering junior, said he has had every experience as a pedestrian that one can imagine.

Roman said he thinks education for pedestrians would be good, since many students on campus don’t have any knowledge of the laws of being a pedestrian. (Stop, Caution, Go, Walk, Don’t Walk, Right of Way, simple.)

“I always just figure pedestrians have right of way,” Roman said. “I think it could be valuable to educate students on what they can and can’t do.” (Cars can kill people when they crash into pedestrians.)

Keep the information coming, it’s only going to improve things at ASUPD by making