How to Confront Police Violence

Editorial note: This article, “4+4+4 Dinselleşen Eğitim Sisteminin Zararları” (Part 1 and Part 2) was written collectively by Özgür Düşünce Hareketi (Free Thought Movement) in Turkey. It makes a thorough analysis of the recent transformations in the Turkish education system. We, Out for Beyond, decided to take this opportunity to provide an account of the educational reforms, referred to as 4+4+4 in Turkey (meaning that primary education, secondary school education and high school education will take four years each). The original text is intended for the Turkish audience, we therefore shortened the text and added footnotes in the translation for the English-speaking readers.

We are thankful to Broyd who carefully went over the translation, made essential corrections, and read the proofs of the text.

Note on translation: The original article frequently uses a term, which literally translates as “religionization”.It is in fact a well-established political term in Turkey, which is used as an antonym to “secularization”. It is not the same as reshaping the education system (or the society in general) in a dogmatic, non-evidence-based way; because the process is considered as a planned introduction of religious ideology into the social and political realms. It is also not Islamization, since it encompasses many aspects (such as creationism in biology textbooks) that are not restricted to Islamic ideology. Therefore, we chose to keep the literal translation “religionization” within quotation marks.

Hundreds of topics arise under the issue of “Turkey’s education problems”. The most recent of those is the new system, referred as “4+4+4”, which prescribes an education system of separate schools, each taking four years. However, in order to understand this last reform and its singularity, we must first take a broader look at the education system in large and how it operates. 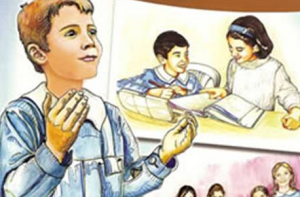 It is clear that the AKP1government pushes the education question as part of the “religionization” of the country as a whole. A combination of many factors led AKP to rise and enabled structural transformations in several items. This can be seen as AKP’s desire as well as its promise. In accordance with the regional changes in the Middle East, the state paradigm must have changed too, and the arrow of change pointed against existing progress.

AKP’s policies have always accorded with this wind of change. Hence, the intervention in the education sector started far earlier than the most recent reforms. Some concrete indicators are as follows: In contrast to the huge need for teachers, many unemployed teachers are put aside in the annual assignments whereas thousands of religion teachers are employed – and many of them take administrative roles in the schools. The curricula have been constantly modified in favor of creationism. The Imam Hatip High Schools2were taken off from vocational school status. There is an increasingly common discourse of “prayer rooms for each school”. The personnel of TÜBİTAK3were replaced according to government’s ideological priorities. In the rectoral elections in the universities, the president Abdullah Gül has not complied with the election results and assigned rectors according to other political preferences.

Although AKP had the opportunity to demolish the education system in Turkey, the foundation of this transformation was laid by previous governments. The greatest damage done to Turkish education system was due to the military intervention of 12 September 1980. This coup d’etat inserted religious education into primary schools and secondary schools, a strategic step towards a more religious society. The 1982 Constitution states in Article 24 that

This article not only immersed a harmful element into the formal educational curriculum but also paved the way for small children to be registered into religion courses not controlled by state authorities.

Let us now take a deep breath and ask ourselves: Why is the “religionization” of public education harmful?

It is a well known pedagogical fact that education should be given according to the cognitive and physical development of the child. With this in mind, we have a three-fold answer to our question.

1) Between ages of 6 and 11, children are capable of internalizing only concrete concepts. They can find simple solutions to simple problems, understand commands and exercise the necessary actions. What they cannot do is to contemplate abstract concepts and take actions about them.

In this period, one can talk to a child about all concrete things such as apples, toys and cars, but the child cannot make sense of concepts such as god, heaven, hell, demon and so on. Therefore, such a child would not have a healthy cognitive development because s/he would grow up in a terrifying environment where someone who watches her/him all the time, making notes of every single action and which s/he cannot see nor touch nor hear, an entity which will punish her/him for all her/his faults. The child would further grow strong guilt feelings whenever s/he does something (intentionally or unintentionally) that the religion orders her/him not to do. This would have deep psychological consequences.

After age 11, on the other hand, the child enters a critical stage in cognitive skills where s/he develops critical thinking skills. Therefore, the teaching of dogmatic, unquestionable knowledge would hinder this development.

2) Another harmful aspect of the “religionization” of education was deliberately introduced by the policy makers. The 1982 Constitution defines the religion course as “Religious Culture and Moral Knowledge”, thereby implying that morality is a concept directly linked to religion. Via compulsory religious courses, the borders of “morality” are framed and restricted by a particular sect (the Sunni interpretation) of a particular religion (Islam). This approach not only indoctrinates the unfounded claim of “no religion means no morality” but also undermines the education of morality and of religion.

3) As a direct consequence of secularism, public education should see to it that each individual is provided with the critical thinking skills that would enable her/him to reach her/his own conclusions about the world and give her/him the possibilities of self realization.

We have been observing the harmful consequences of the “religionization” of education for a long time, especially with the theory of evolution. This “spiteful of science” attitude will increase with the recently introduced religion courses. For instance, the new “Basic Religious Knowledge” course includes phrases like “the fine tuning in the universe”, “perfect human”, “intentional creation” as chapters’ morals. These statements are not supported by evidence, and in fact contradict with it. The same course aims at teaching that “the aim of the creation of human is to worship Allah”. It is further clear that whenever there is conflict between the content of this course and other courses, the values and the information in the other courses will be censured. 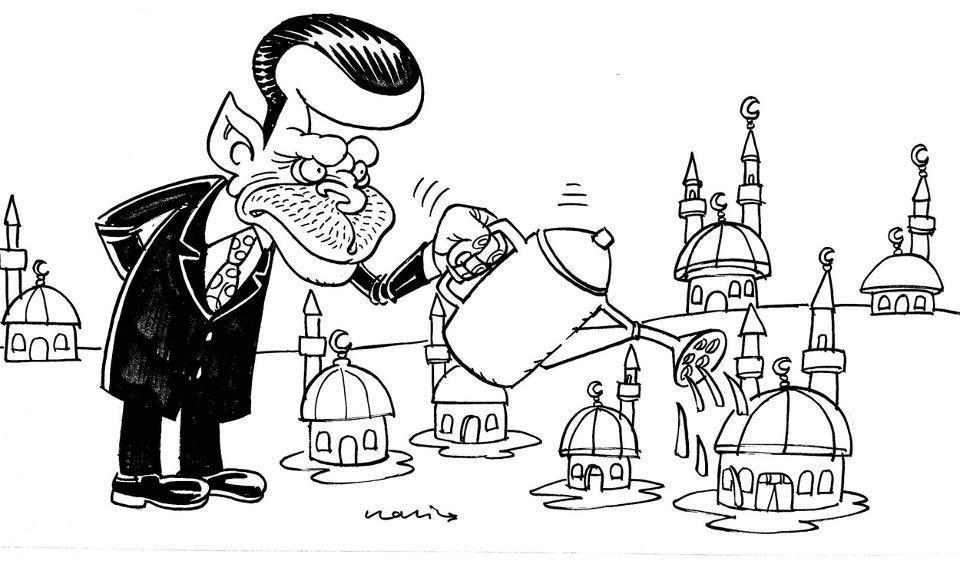 The new education system surpasses the 1982 Constitution. Not content with the so-called “Religious Culture and Moral Knowledge” course, the system introduces “Arabic” in primary school and “Basic Religious Knowledge”, “The Holy Koran” and “The Life Of the Prophet Mohammed”, thereby teaching religious knowledge continuously. We should emphasize that by religious knowledge is meant the theological knowledge of Islam’s Sunni sect.4One example of this approach can be seen in the textbook for the course “The Life Of the Prophet Mohammed”, aimed at ninth grade students:

Yet another problem of this system is that the Koran will be read in Arabic for the course “The Holy Koran”, as in the religious courses enforced by the state, due to the ridiculous claim that the book has its own language. However, for someone to understand the Koran or any other book (independent of whether it is considered holy or not) it is essential that one reads it in a language that one is competent in and at an age when one can grasp its content. It is clear that the (elective) Arabic course would not suffice for the students to comprehend the book properly and therefore what is expected from them is that they memorize it. This is manifested publicly several times. One instance is that the 85th page of the instructor’s book for “The Holy Koran” course gives hints on “some principles on how to make surah apprehension easier” where it is explained how the students can easily “memorize” those surah’s. Moreover, Ömer Dinçer, the Minister of Education, confessed in an interview6that the students “would not understand what they read”:

“But the Parliament declared: The teaching of Koran and the Life of Our Prophet. We will teach it in secondary school and in high school. We will teach how to read the Koran like Turkish. After all, Arabic is an elective course. We will not teach Arabic. It is a different issue to read Koran based on the Arabic alphabet in the Arabic language. This means, the child will learn how to read a word written with Arabic letters, but the thing s/he will read will be Koran. We will create a curriculum. S/he will read but will not understand. After all, the majority of those who read the Koran do not understand it, they read it as a holy book.”

The “religionization” is not the only problem arising from the new 4+4+4 system. At first glance, we notice the following: The system lets children of age 5-5.5 enter the primary schools, when they are not physiologically ready to hold pencils nor cognitively prepared to understand and implement commands. As a consequence, primary education is now reduced, in practice, to three years. Furthermore, by fifth grade, the classes will be given by branch teachers, resulting in reallocation and unemployment of many teachers. Also, the early start to schooling without any infrastructural preparations will result in overly crowded classrooms. We would like to give some examples of complaints in order to make the point clearer.

The Education Workers’ Union released a declaration7, emphasizing that the separation of primary and secondary education in a manner that is not based on pedagogical principles would imply an increase in child employment and child brides. The way is now legally cleared away for the seclusion and forced marriage of female children, as child brides are generally of age 13, 14 and 15.

According to an interview published in haber.sol.org.tr on September 21st, 2012, Ertan Uysal, the chairman of the Education Workers’ Union in Tokat, made the following remark:

“… while the mere existence of religious culture courses in private schools is controversial, it is a big problem to introduce forced elective courses on religion. This imposition of religious education on students who would primarily need courses such as arts, music and sports resembles the paradigm of the Middle Ages.”8

Much earlier than this interview, Hürriyet newspaper made a news item9on the letters sent to the Ministry of Education by the parents. Here are a few items from those letters:

“ – I don’t want my 5-year old child to get on and off the bus by himself to reach home.

– I don’t want my child to be pressed by the class teacher who is forced to finish the annual curriculum.

The “religionization” of education is a big problem. When this transformation is accompanied by unhealthy, inconvenient practices, it may give rise to a social disaster. In order to prevent this, it is urgently needed to sweep away religious ideologies, not only from education but from all levels of the state affairs.

As Özgür Düşünce Hareketi, we believe that several reforms should be made.

1 Adalet ve Kalkınma Partisi – Justice and Development Party. The governing party in the Turkish parliament since the 2002 elections.

2Religious Vocational High Schools, that are meant to train imams but are in practice training for any profession.
3Türkiye Bilimsel ve Teknolojik Araştırma Kurumu – The Scientific and Technological Research Council of Turkey.