Riot control methods: What’s in your riot’s menu? How to deal with them? – Çağrı Mert Bakırcı part 3.

We divided the article into parts and therefore restructured the sections for presentational purposes. The first part covered batons and pressurized water while the second covered water cannons and other armed vehicles. We will now discuss

While they are used rather infrequently, scent-based weapons serve as an important example of non-lethal weapons. The malodorants, sprayed from water cannons, leave a terrible odor in the affected area and do not wash off easily. As a result the individuals feel like vomiting and cannot focus on the protest. Sometimes the toxicity of these chemicals can be so overly high that they can cause permanent damage.

As an example, Israel used them for crowd control in September 2008. (See photo below.) 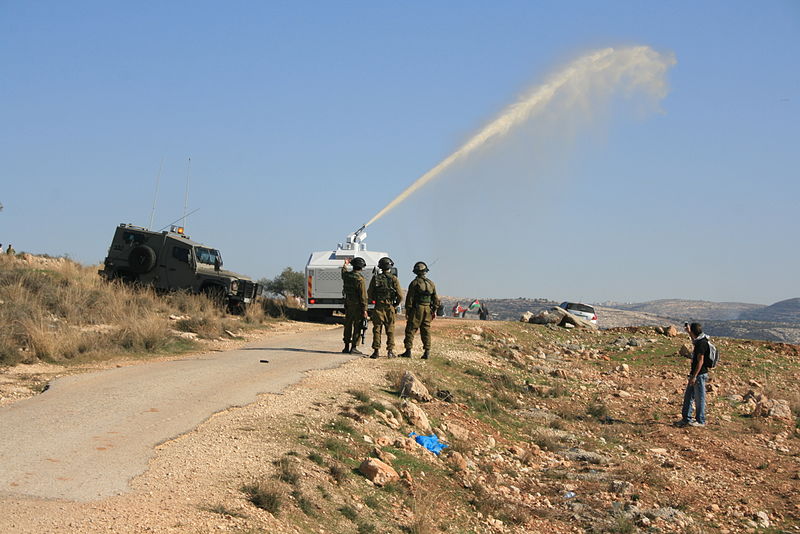 According to the Wikipedia article on Pepper spray,

Pepper spray, also known as OC spray(from “OleoresinCapsicum“), OC gas, and capsicum spray, is a lachrymatory agent(a chemical compound that irritates the eyes to cause tears, pain, and temporary blindness) used in policing, riot control, crowd control, and personal self-defense, including defense against dogs and bears. Its inflammatory effects cause the eyes to close, taking away vision. This temporary blindness allows officers to more easily restrain subjects and permits persons using pepper spray for self-defense an opportunity to escape. Although considered a less-than-lethal agent, it has been deadly in rare cases, and concerns have been raised about a number of deaths where being pepper sprayed may have been a contributing factor.

The active ingredient in pepper spray is capsaicin, which is a chemical derived from the fruit of plants in the Capsicumgenus, including chilis. 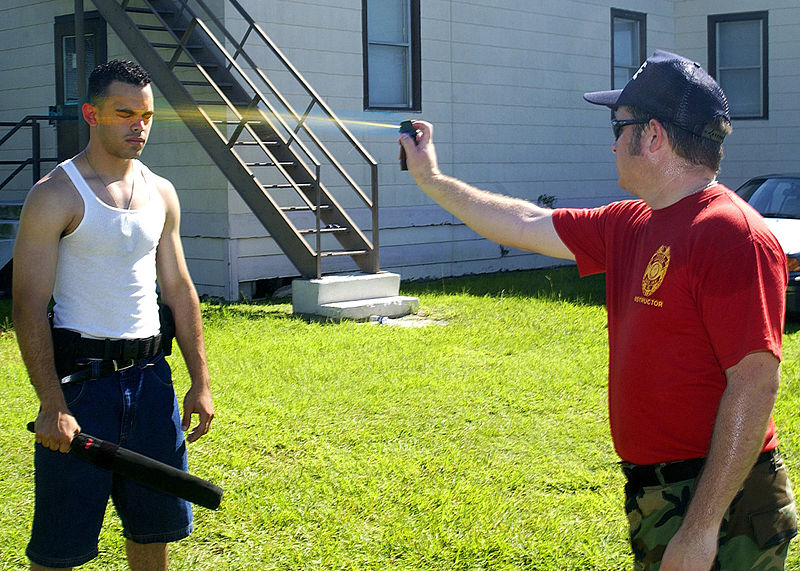 This gas can be in different colors, depending on the amount of pepper and other additional chemicals constituting it. While the more common color is a grayish white, it can also be orange, brownish orange or yellowish orange. Sometimes colorants are added on purpose in order to block sight or paint the protesters.

Pepper gas is either sprayed from canisters or fired from a paintball gun. In the case of firing from a gun, its effect from short range is quite similar to actual guns. Hence, it is required that it is fired with an angle of 45 degrees to the ground. As the capsule is hot and fast, when fired from short distances, it causes burns, disruptions and serious brain/sight damages.

Pepper spray is an inflammatory agent. It causes immediate closing of the eyes, difficulty breathing, runny nose, and coughing. The duration of its effects depends on the strength of the spray but the average full effect lasts around thirty to forty-five minutes, with diminished effects lasting for hours.

The Journal of Investigative Ophthalmology and Visual Sciencepublished a study that concluded that single exposure of the eye to OC is harmless, but repeated exposure can result in long-lasting changes in cornealsensitivity. They found no lasting decrease in visual acuity.

The European Parliament Scientific and Technological Options Assessment (STOA) published in 1998 “An Appraisal of Technologies of Political Control” with extensive information on pepper spray and tear gas. They write:

The effects of pepper spray are far more severe, including temporary blindness which lasts from 15–30 minutes, a burning sensation of the skin which lasts from 45 to 60 minutes, upper body spasms which force a person to bend forward and uncontrollable coughing making it difficult to breathe or speak for between 3 to 15 minutes. …

… Direct close-range spray can cause more serious eye irritation by attacking the cornea with a concentrated stream of liquid (the so-called “hydraulic needle” effect). Some brands have addressed this problem by means of an elliptically cone-shaped spray pattern. 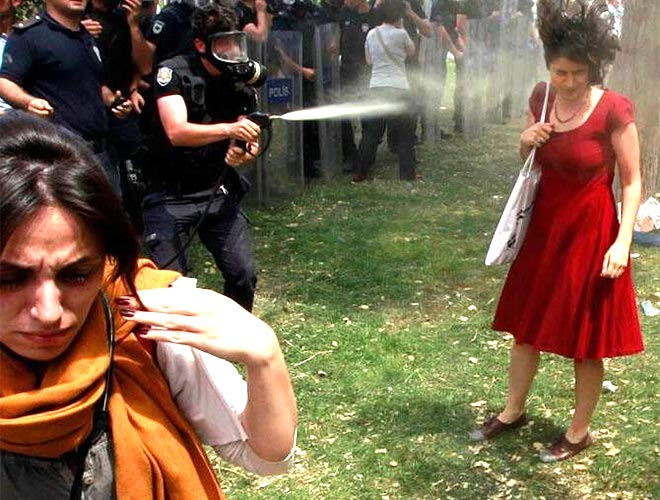 Capsaicinis not soluble in water, and even large volumes of water will not wash it off. In general, victims are encouraged to blink vigorously in order to encourage tears, which will help flush the irritant from the eyes.

“…there was no significant difference in pain relief provided by five different treatment regimens. Time after exposure appeared to be the best predictor for decrease in pain…”

Contact with liquid seems to have a relaxing effect, but there are no reports showing pain relief. In any case, the fluidity is considered to slightly reduce the pain caused by the pepper gas. Many ambulance services and emergency departments use baby shampoo to remove the spray. In general, the time for recovery can be reduced to 7-15 minutes with these extra treatments. 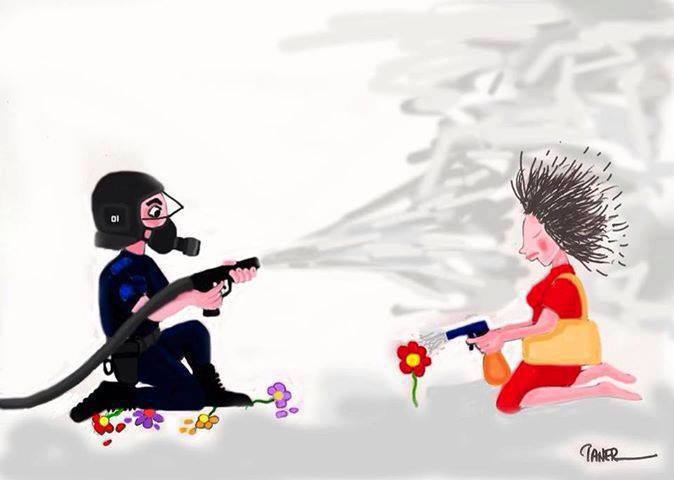 As the Wikipedia article on Tear Gas states, research shows that the use of tear gas has some serious risks:

As with all non-lethal, or less-than-lethal weapons, there is some risk of serious permanent injury or death when tear gas is used. This includes risks from being hit by tear gas cartridges, which include severe bruising, loss of eyes, skull fracture, and even death. While the medical consequences of the gases themselves are typically limited to minor skin inflammation, delayed complications are also possible: people with pre-existing respiratory conditions such as asthma, who are particularly at risk, may sometimes require hospitalization or even ventilation support. Skin exposure to CS may cause chemical burns or induce allergic contact dermatitis. When people are hit at close range or are severely exposed, eye injuries involving scarring of the cornea can lead to a permanent loss in visual acuity.

There are several types of tear gas: 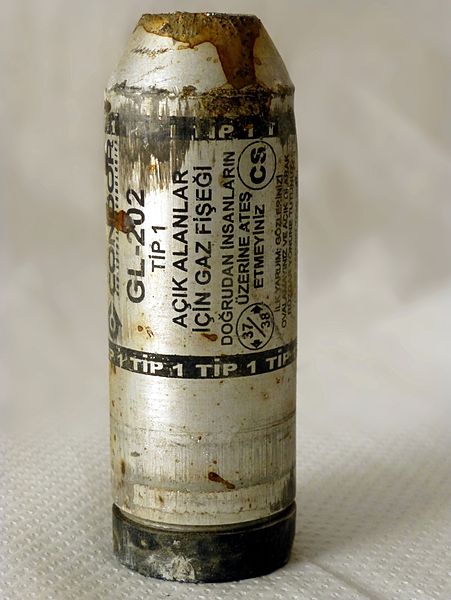 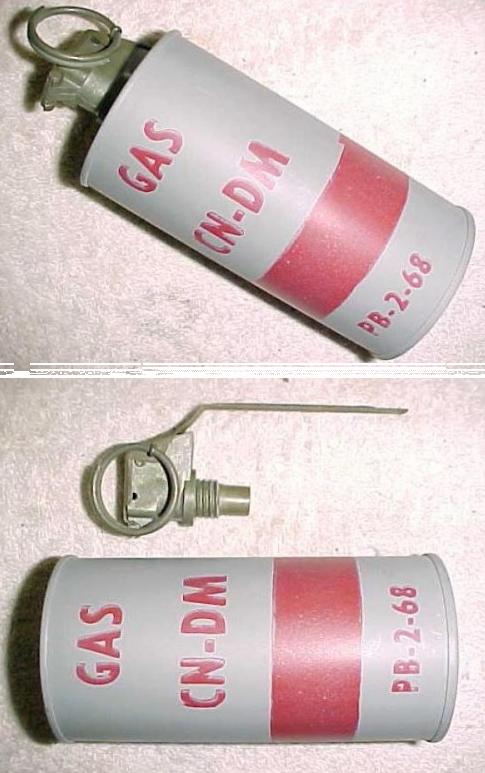